What is ambergris and why it is precious and rare, ambergris is as precious as gold. In the fragrance industry it is highly prized as a fixative for expensive perfumes and is much sought after in the Far East as an ingredient in traditional medicines for a variety of common ailments.. Ambergris originates in the intestines of male sperm whales after they dine on squid, whose hard, pointy beaks abrade the whales’ innards, a whale had a bit of indigestion that upset stomach creates ambergris, Scientists believe that the whales protect themselves by secreting a fatty substance in their intestines to surround the beaks. Eventually the animals cast out a huge lump, up to hundreds of pounds at a time.

But don’t refer to it as “whale vomit”; scientists postulate that whales do not expel ambergris through their mouths. No one has ever seen a sperm whale excrete ambergris, although sperm whale expert Hal Whitehead of Dalhousie University in Halifax, Nova Scotia, admits that it is assumed the voiding takes place as fecal excretion, because when first cast out, he says, “Well, it smells more like the back end than the front.”

In 1986 a moratorium was introduced on commercial whaling. In tandem with that several countries introduced a ban on trade in ambergris driving the lucrative business underground.

The precious substance can only be sourced from the wild in one of three ways: finding lumps of it floating at sea, finding lumps of it washed up on the strand and mining it by dissecting the remains of dead Sperm Whales, the largest toothed whales in the world. 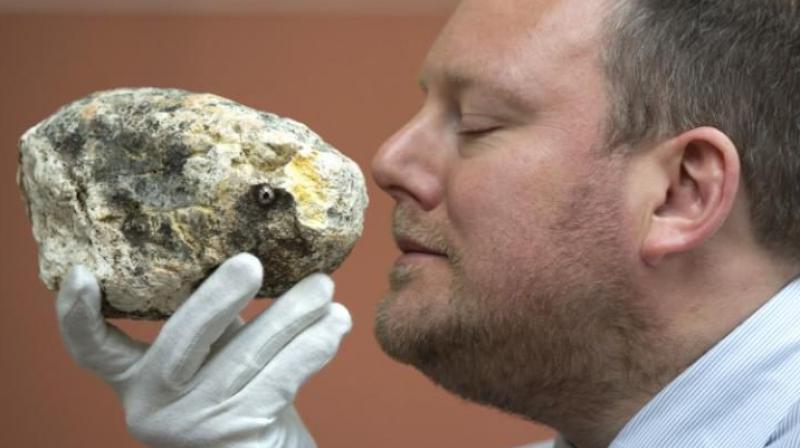 One way to find it is to buy a piece of it and to train a dog to sniff it out while beachcombing. But since it is so rare, chances are that the dog might never find a lump in a lifetime of sniffing.

Exactly how and why Sperm Whales make ambergris is still not entirely clear. It is known that these animals dive deeply and hunt squid in the ocean depths. Squid have hard parrot-like beaks and after digesting a feed a squid the whales are known to vomit up the beaks rather than digesting them.

Whales evolved from cow-like land animals and like their ruminant ancestors they have four stomachs. It is believed that some squid beaks are not vomited up but pass through the stomachs into the small intestine. To protect the intestine wall from irritation by these errant beaks it is speculated that a fatty substance is made from bile, coats the beaks and is passed out of the body via the bowel.

This soft, fatty, foul-smelling substance in the whale poo can float in the sea for years. Over time it hardens to a wax, darkens in colour and its smell matures to a sweet but musky and earthy one that is quite unique thus producing ambergris.

The information presented in videos as well as textual articles on this website are based on the writers’ own research, analyses and sources. The organization, VeryNewsy, does not necessarily agree with the views, research and analyses that have been expressed or presented. Got it
Privacy & Cookies Policy

Any cookies that may not be particularly necessary for the website to function and is used specifically to collect user personal data via analytics, ads, other embedded contents are termed as non-necessary cookies. It is mandatory to procure user consent prior to running these cookies on your website.